Happy New Year to All of Our HeadsUp Readers!

It’s 2020 and I’m hopeful that it will be a great decade for the world’s people.  I’m truly excited to see what new ideas and technologies will be developed over this decade. Ten years from now, what will the world look like?  How will we communicate, what will we be driving, how will we be sharing the resources on Planet Earth with each other, will people have started colonies on the moon or Mars? There are just so many possibilities.

Cities in water-scarce areas like Goodyear, Arizona, need to remove as much debris as possible from the wastewater their growing cities generate so that they can turn it into reusable water.  Our Case Study this month tells the tale of how and why Paul W. Litchfield, then a junior executive at the Goodyear Tire and Rubber Company, came to Arizona in 1917 during WWI to start a cotton farm in the middle of nowhere.  Litchfield was a brilliant inventory and leader and it is clear why he ultimately became the president of the tire company.  It’s a really interesting history which I’m sure you’ll enjoy!  Sr. VP Gerald Seidl recently visited the city and the Perforator® perforated plate screen we supplied them back in 2016. We are extremely proud of the recent testimony given by the Operations Supervisor, Gary Tuning, to our Perforator’s quality and durability included in the article.

Companies like ours continue to work on innovations to improve the quality of the world’s water, find new ways of harnessing water for reuse, and teach the public about ways each of us can make a difference.  Even the Weather Channel is making a difference with their Forecast: Change initiative, changing their name to The Water Channel for World Environment Day back in June.  We have a short article with some fun links covering not just their initiative, but how you can save 25% off your home electric bill while saving water!

So, the holidays are behind you, you have a plan on how to save water for the world and save on your electric bill, too, and now it’s time for a break.  What better way than to meditate.  Meditation has limitless benefits and can be done anywhere, anytime.  You can do walking meditations, meditate at your desk, meditate when you wake up or go to sleep.  No lotus position required!  Haven’t tried it before?  Well, no class required, either.  There are countless apps out there that will guide you through meditation until you feel comfortable doing it on your own.  I use a couple of them. One I like is by Sonima which also covers yoga, fitness and food.  Their guided meditations are a great place to start.

What will this do for you? A mere 10 minutes a day of meditation will change the way you react to everything, not just improve your mental and physical condition.  The article discusses the benefits of meditation and gives additional tips on how to save that precious morning time for the important tasks at hand when we are at our potentially most focused. Ever wish you had thought about what to say for just a second before you spoke?  That is what you can gain from a regular meditation practice of 10 little minutes a day.  I’ve saved this Harvard Business Review article for just the right HeadsUp issue. What better time to share it with everyone than the beginning of a new decade!

Wishing all of you a happy, healthful, thoughtful and successful 2020!

P.S. New to our HeadsUp Newsletter?  Sign up here.

How the City of Goodyear, Arizona, Came to Be
And How the High Growth City’s Headworks Perforated Plate Screen Keeps Up

When visiting one of Headworks International’s installation sites, I am always interested not only in the facility, but also the history of the area. A recent trip to Phoenix, Arizona, allowed me to visit one of our perforated plate screen installations nearby in the City of Goodyear. The name immediately prompted me to research the possible connection between the town and the famous tire company.

In 1917, during World War I, a junior executive at Goodyear Tire and Rubber Co. named Paul Litchfield was on a desperate search to solve a world crisis affecting his company. Goodyear Tire and Rubber needed long staple cotton like that grown in Egypt to make a new tire Litchfield had invented for airplane tires. Due to the conflict, cotton was difficult to get from abroad, making the product in short supply. Traveling around the South, Litchfield realized Arizona’s climate and soil were much like that of the Middle East.  So, he purchased 16,000 acres.

The small community was first called Egypt because of the Egyptian cotton grown there, but was later renamed Goodyear after Charles Goodyear, the founder of the Goodyear Tire and Rubber Co. The story of how he built the cotton farm, recruiting 5,000 farmers from the area and Mexico is a fascinating one and I recommend you try to find a copy and read his autobiography The Industrial Republic: Reflections of an Industrial Lieutenant.

As in many places in the southern United States, Arizona is a fast-growing state and the City of Goodyear is following the larger trend. Wherever you drive, construction is visible. Since 2000, the city has had a 322% increase in its population.

Five years ago, the city decided to expand the plant capacity due to the growing wastewater treatment demand. As part of the expansion, they purchased a second screen for cleaning the inflow. It was particularly important in this water-scarce region that as much physical debris be removed to make treatment to reusable quality levels easier. They ultimately selected a perforated plate screen from Headworks, our Perforator®.  I took this video while there. 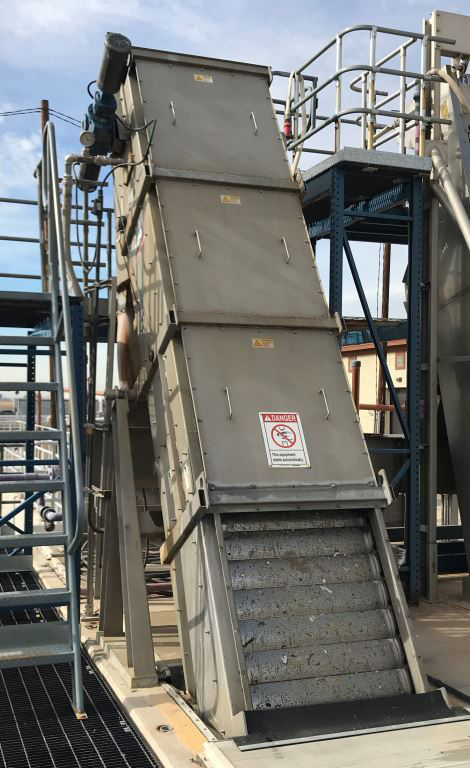 In 2016, Headworks Inc. installed a Perforator Screen with 1/8” (3mm) holes into a 5 foot (1.5m) deep and 4 foot (1.2m) wide channel. The screen discharges into the existing sluice trough system. The plant upgrade increased the original flow capacity of 12 mgd (45,000 m3/d) to 16 mgd (60,500 m3/d. Since installation, our screen has been handling the full planned flow, resulting in a nearly continuous operation. The statement below from Gary Tuning, Operations Supervisor Reclamation/Public Works for the City of Goodyear, is a true testimony of the reliability we at Headworks strive to achieve for every piece of equipment we ship:

“The Perforator Screen Headworks supplied and Felix Construction installed over 3 years ago saves us a tremendous amount of work. The removal rate reduces clogging of the downstream equipment and processes. The screen itself does not require much attention, only a weekly pressure washing. Although running most of the time, the brush and spray system works reliably and the 1/8” (3mm) perforated plates are cleaned with a minimal amount of very fine screenings allowed to get downstream. We are in the process of expanding the plant due to the rapid population growth here in Goodyear AZ and this screen is expected to handle the increased flow with no problems.”

With treatments plants looking to remove more and smaller materials from the incoming flow, the Perforator is the obvious choice for increasing capture rates. Headworks has the team that can bring you the 4 E’s: effective, efficient, economical, and easy-to-use solutions.  With over 25 years of experience in every type of industry and municipality, our talented engineers have the right solution for your screening and compacting needs.  Contact our local manufacturers’ representative or our sales engineers at sales@headworksintl.com or +1.713.647.6667 to discuss how we can get you the results you’re looking for! See all our product lines and read more about how we solve problems around the world at www.headworksinternational.com.

Want to Save 25% off Your Electric Bill?

The Weather Channel & IBM Launch Forecast: Change to Aid in the Water Crisis with lots of resources.

Want to Save 25% off Your Electric Bill?

The change of name was a one-day nod to World Environment Day on June 5, 2019, and a kick off of their and parent company IBM’s initiative “Forecast: Change.” Forecast: Change was created to highlight and combat the issue of the world’s ever increasing water scarcity in the world. It has a lot of easy ways to get involved in the challenge and how to set up your own challenge.  They’ve partnered with Charity: Water to make things even more transparent.

Reading through it, I found an interesting fact about our use of electricity that we probably all intuitively know at some level. But it was the extent of the impact that surprised me.  Per the site, “It takes water to make electricity. [I knew that.] When we waste energy, we waste water, too. [I knew that, too.] Nearly 25% of all residential power consumed stems from our idle appliances and devices. [I confess that I didn’t know the percentage was that high.]”

One of the challenges Forecast: Change made in October was to unplug.  When you aren’t using them, unplug your cell phones, laptops, computers, monitors, kindles, hair dryer lying on the counter, toasters, blenders, hot plates, televisions – well, you get the picture.  Add all of that up and you are wasting 25% of your electric bill each month.  And all the water it took to generate it.

One hot summer in Houston, my husband was out of the country for an extended business trip.  Besides the peace and quiet, it gave me the opportunity to unplug all of his gadgets and mine as well, only plugging in the toaster if I was going to actually make toast.  Not only turning the computer off, but unplugging it from the wall. Many devices in our homes use nearly as much electricity when turned “off” or in “sleep mode” as when they are active.  Additionally, according to the instructions that came with my new laptop battery, leaving it plugged in will damage its lie expectancy resulting in yet another expense. And yes, the next electric bill dropped significantly!

So, if your resolution for the year is to do something for the planet, save water, or save money, you can actually achieve all three simply by unplugging!  My husband doesn’t know it yet, but in the new place we’re renovating, I’m specifying European-style electrical switches with off buttons – and to keep him happy, also a USB plug.

Happy New Year to all of you!

Start 2020 with a Clear Vision through Meditation

One of Michele’s favorite guided meditation sites is on Sonima – quiet your mind here.

Wish You Thought a Second about What to Say Before You Said It?

10 minutes a day of meditation will get you there, according to this Harvard Business Review article. Have fun here.

We are dedicated to protecting your privacy. Headworks International will never disclose your email address to third parties except to the local manufacturer, representative that serves your area. Read our Privacy Policy.