Hello to all of Our HeadsUp Readers!

It’s April Fools’ Day and I can imagine people in various places coming up with hilarious pranks to pull on their family, friends, classmates and colleagues.  There are some pranksters out there who might even be making Fools out of complete strangers.  Frankly, I’ve never been good at coming up with some funny practical joke on this day.  It just wasn’t a “thing” our family did and I’ve carried on the tradition of basically ignoring it.

Our hefty, mighty, Headworks MS Bar Screens are no jokesters either! Ever heard of sewer monsters?  No?  Well, they are real and they cause huge headaches for cities wherever “flushable” wipes are sold. Our screens do battle with those bad things wherever they’re found. A local engineer sent us a photo of a giant sewer monster our Screen in the little town of Southport, Indiana, captured.  I promise this isn’t an April Fools joke.  Read it for yourselves and be amazed.

Remember last month my mentioning pesticides in beer?  The weedkiller Roundup® is the most ubiquitous weed killer in the world and it’s showing up in our food chain. Staying in the organic aisles of your grocery store can help reduce exposure, but we now must contend with pesticides showing up in our beer and wine.  Oh my, don’t we all wish that “Intoxicated” was just a joke.  The new study was reported on H2O Radio and it’s worth a listen.

In the January HeadsUp issue, we discussed the power of organic diets to reduce the risk of cancer.  It’s one thing to say to yourself “I’m going to buy organic whenever I can.” It’s another thing to execute on that commitment.  And, let’s face it, organic is much more expensive than conventionally grown or raised food even though the farmers are spending less on pesticides and fertilizers.  (Yes, I know I’m bound to get lectured on that statement soon by some reader more knowledgeable than I am about farming methods.) But no foolin’, there’s help on the way!  Our reader, the editor of Jen Reviews in New Zealand, wrote to let me know they’d recently published a detailed, up-to-date guide on 15 types of produce you should always buy organic and 11 types to buy conventional. It’s free and you can find it here.  Thank you to Jo, the editor of Jen Reviews, for the help in keeping us from becoming April Fools at the checkout line!

I’m wrapping up this HeadsUp issue a bit early so I can go think about pranking the office.  Maybe it will snow?  Maybe the toilet water will turn green (my late mother’s only prank she pulled on us)?  Who knows?  Just so long as I’m not the April Fool.

Hoping April Fools’ Day brings a smile to each of you!

Learn about Sewer Monsters, Southport, Indiana, and see the monster our Headworks’ Bar Screens overcame there. No joke!

This Sewer Monster is No April Fools’ Day Joke!

The City of Southport in Indiana is a quaint little suburb of the large City of Indianapolis. It’s a relatively youthful community with an average age of 41.5 according to the 2010 Census.

The name Southport comes from the town’s location just lo the south of Indianapolis. Established in 1832, it kept its independence, even as surrounding cities were incorporated into a project called Uni-Gov – the consolidation of Indianapolis and Marion County. Officially, it has a population of only 1850 people; however, as a suburb of its large sister city, it shares some of a big city’s challenges. Its area may be small at less than 0.63 square miles (1.63 km2), but, boy, did it have a giant sewer monster!

The Southport Advanced Wastewater Treatment Plant (“AWT”) is located at the end of one of several tunnels called DigIndy which are used to collect storm water. Citizens Energy Group is the private utility of the region which serves over 800,000 people and businesses in and around the Southport area.  According to the Group, when fully completed DigIndy will collect and store 250 million gallons (1 million m3) of storm water during and after rain events. Some of the flow is then treated at the Southport AWT. The DigIndy retention system will greatly reduce sewage overflow and improve the overall the water quality of the area. 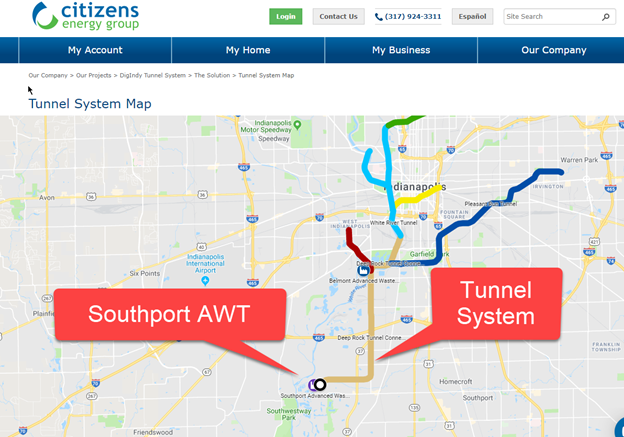 The initial discussions between the City’s consultant Jacobs (formerly CH2), and the city utility, Headworks’ well-respected local rep firm, BL Anderson, and our team go back to 2010.  After several years of engineering design best practice discussions over what screen would operate the best, a competitive bidding process was held in 2014 and Bowen Engineering Corporation was awarded the construction contract.  In turn, Bowen engaged  Headworks to provide four large MS1 Bar Screens, three units for the Surface Flow location and one for the Tunnel Flow, all  with 0.4” (10mm) bar spacing. Each of the screens handles up to 120mgd (400,000m3/d) during peak flows. 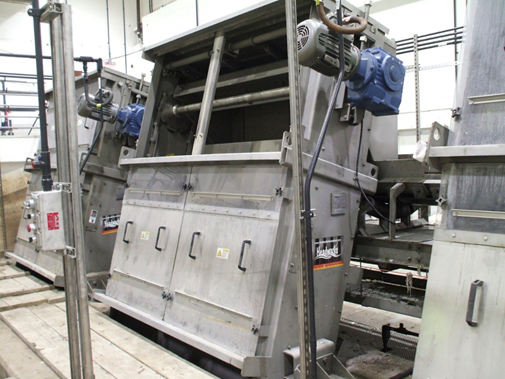 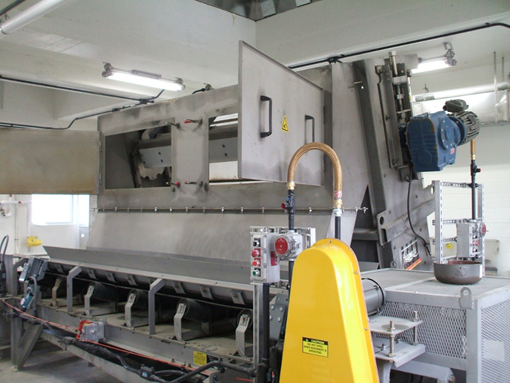 Now, back to those large city problems experienced by its smaller neighbor. The DigIndy tunnel system Indianapolis designed brings challenges amplified by their dimension. One of them is what is becoming a worldwide infamous headache to wastewater treatment plants in most western countries —  “sewer monsters” which are composed of fat combining with those supposedly “flushable” wipes. The wipes weave themselves together, glued by the fat globules in the water, becoming ever larger with time.  Their size can make operation of a treatment plant come to a screeching halt when their size blocks the channels carrying the wastewater to be treated.

Recently, we received a photo taken by a Wessler Engineering engineer, one of the consultants involved in the DigIndy project. He was truly impressed at the size of the sewer monster the Headworks Bar Screen pulled out of the channel. 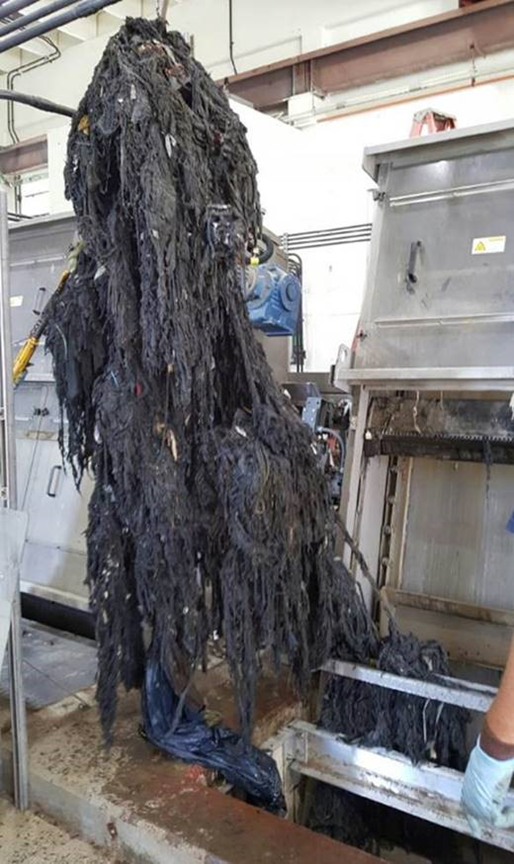 These baby wipe sewer monsters are becoming an increasingly larger and more expensive problem for utilities around the world. The next best solution besides NOT flushing wipes down the toilet is to screen them out with the right screening equipment. Last year we ran a story on of our installations in Glenbard where we tested the efficiency of our MS Bar Screen for removing wipes. . If your utility or plant faces the same challenges, contact us and let’s design a system together which can minimize interruption and chaos at your facility.

To learn more about Headworks’ products and services, please visit our website at www.headworksinternational.com or call 713.647.6667 to have our Headworks Team design the right Sewer Monster Killer Screen for your application.  No joke!

What is April Fools’ Day?

Live somewhere that this isn’t a tradition on the first day of April? Learn about it here.

Yikes! Pesticides in My Beer and Wine?

Learn the latest as reported on H2O Radio here.

What to Buy Organic and What Not to Worry About

15 things to always buy organic and 11 to save your money on by buying conventional. Check it out here.

We are dedicated to protecting your privacy. Headworks International will never disclose your email address to third parties except to the local manufacturer, representative that serves your area. Read our Privacy Policy.